If you’re working with the International Phonetic Alphabet (IPA) this is for you. There are two generally accepted methods for producing IPA characters in LaTeX. One method, is to use Tipa, another method is to use a unicode font with XeLaTeX/LuaTeX.

Tipa, which in reality refers to two packages: tipa and tipx is an extensive package written by Rei Fukui. The 89-page manual is thorugh and well written and includes a large appendix with commands of how to typeset every single letter in the IPA. The package is on CTAN, so you should be able to install via your LaTeX package manager. You’ll find the manual here.

Usage is also quite simple. To call the package:

depending on which characters you need to typeset. Look up the characters in the manual appendix. Then to typeset any given character:

Below, you’ll find a complete example:

which will produce the following:

Alternatively, you can also use a Unicode, such as the Doulos SIL with XeLaTeX/LuaTex. If you don’t already have the font you can download it here. If you’re using Overleaf you don’t need to download anything, the font is already included.
Once fontspec and the Doulos font (other Unicode fonts should also do) has been loaded you can enter the IPA characters as you would any other character: 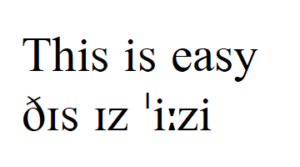 I won’t go into a discussion of which method is better. There is an excellent list of pros and cons on this StackExchange post. The one time I’ve had use for this I used the tipa package, which I think worked great. However if I’m already using fontspec, for one reason or another, I’d go with the Uniode option.

This site uses Akismet to reduce spam. Learn how your comment data is processed.